A reader of Swedes at War in the United States, Mr. N. Faller, has enquired about a mysterious unit mentioned in our book, the volunteer division "Theodore Roosevelt". Mr. Faller is right in doubting the existence of this unit.

However, the reply is not simply that it never existed. Mr. Faller has kindly allowed me to make the full reply to his question public, as it may interest other American readers and also British and Swedish readers. 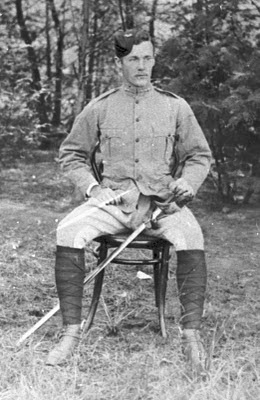 The Swede behind the recruitment drive for the British-American division "Theodore Roosevelt", Ivar Thord Hallström, who in British service became Ivor Thord-Gray. Here he is in South Africa where he discovered the real-life Tarzan. PHOTO: The Research Archives, Umeå University Library

The volunteer division "Theodore Roosevelt" is only mentioned in one sentence in Swedes at War. Still, we should have added a footnote or endnote about it because it is a pretty unknown unit, to say the least.

The division is mentioned in our book in a CV for Ivar Thord Hallström who became Ivor Thord-Gray in conjunction with becoming a British officer in South Africa. In the United States Thord-Gray got the approval of then former president Roosevelt to start up the unit. He focused on recruiting Britons or ex-Brits in the US. By the time the project was stopped, in April 1917, 3,500 men har enlisted for the division. Roosevelt personally thanked Thord-Gray in a letter dated May 25, 1917, and said it was sad the project had to be aborted due to lack of support from President Woodrow Wilson.

As part of Thord-Gray´s work for the "Theodore Roosevelt" project he produced a manual entitled Tactics on Attack and Defence in Trench Warfare. You might possibly be able to find that book via some internet bookseller.

Speaking of World War One, it is not that difficult to prove how close we still are to that war. Close? Well, now in late 2010 there are still at least three WWI veterans alive. Or four if you like: Frank Buckles (US Army 1917-1919), Claude Choules (Royal Navy 1916-1956) and Florence Green (RAF 1918-1919). In addition theres is Mr. Jozef Kowalski of the Polish Army who began his service after the WWI armistice but before the Treaty of Versailles. Here is a nice master list about these veterans if you want to research them.

Why the hard feelings between Theodore Roosevelt and Woodrow Wilson? The most recent arcticle on this subject was the superb piece "War & Diplomacy" in Armchair General July 2010.

For more on Thord-Gray, not least his role in bringing about the Tarzan icon, see Joakim Langer´s book Mannen som hittade Tarzan ("The Man Who Found Tarzan").

BTW Swedes at War was recently used as a source in this Mexican history article, as Thord-Gray was there too, fighting as a soldier of fortune.
created by Lars Gyllenhaal at 16:21