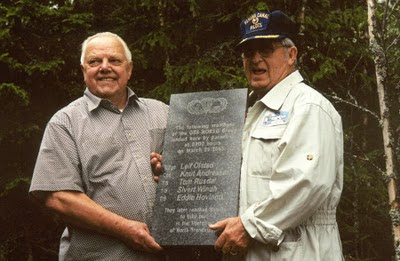 At the OSS NORSO Group memorial in Krokoms kommun in north Sweden. To the right is Norwegian OSS-volunteer Leif Oistad, who passed away on Thursday. To the left is his wartime soldier and peacetime friend Sivert/Ron Windh of Sweden, who passed away in 2007.

On Thursday Leif Oistad, a Norwegian volunteer of OSS Operational Groups, passed away. This happened just twelve days after he was presented with a last medal from the King of Norway.

Here is the official obituary for Leif.

The last time I met Leif was ten years ago. He had experienced much during WWII, both as a sailor and soldier. Both Norway and the United States have now lost a good man.

In Sweden, by lake Landösjön, stands a memorial to the memory of Leif Oistad and his squad, on the spot where they landed by parachute. After having very briefly been "imprisoned" in Sweden, Leif and his men could join up with the main party of the OSS NORSO Operational Group on the Swedish-Norwegian border and perform some final acts of sabotage against German troop transports through Norway.

Both Leif Oistad and his best friend from the OSS, Sivert/Ron Windh, were born in 1922.
created by Lars Gyllenhaal at 09:00