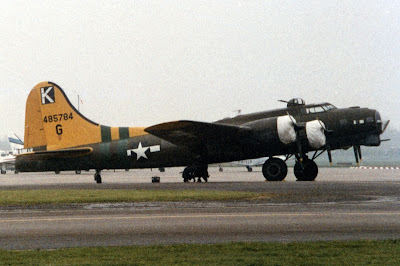 A B-17 Flying Fortress at Rotterdam Airport Airshow, May 1985. PHOTO: Jan Arkesteijn

I just recently became aware of one of the most amazing websites I have ever seen re. Sweden in WWII. The site belongs to Patricia Allen DiGeorge, the daughter of two US diplomats in Stockholm during WWII.

Mrs. Allen DiGeorge´s father flew as a B-17 bombardier in the 8th Air Force and had to force land on the Swedish island of Gotland in early 1944. He was interned by the Swedish Armed Forces but shortly thereafter could go to work at the American embassy in Stockholm for the American Air Attaché, taking care of the needs of the US internees. At the embassy he also worked for the Office of Strategic Services (OSS) with counterespionage against the Germans in Stockholm, working alongside his future wife.

As Mrs. Allen DiGeorge describes on her website, Stockholm became one of the world´s most important towns for espionage during WWII.

So, by all means, explore Mrs. Allen DiGeorge´s site and help her in solving some puzzles so that she may finish her book project.
created by Lars Gyllenhaal at 14:39