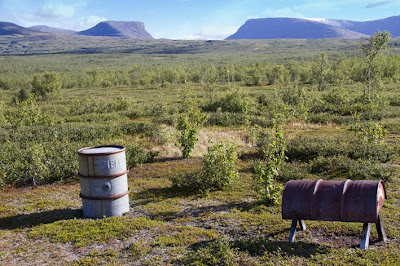 By the just discovered airstrip. The petrol barrel is marked Shell. In the background the magnificent "Lapponian Gate". PHOTO: Björn Lundquist

Could this discovery be linked to the WWII Allied "Kari" or "Sepals" bases in northern Sweden? Or is it something to do with the early Cold War? Well, what seems pretty clear is that Björn Lundquist has photographed a previously undocumented airfield in a strategic area.

After a tip, Björn Lundquist of Kiruna, former commander of both northern Swedish ranger regiments, decided to check out an area between Abisko and Stordalen, places that are not that far from Norwegian Narvik.

What Björn Lundquist has just photographed resembles a simpler WWII or 1950s airfield. According to Lundquist's measurements it is 300 x 40 metres. He also found what seem to be field side markings and a field stop and the remains of a building.

No known Swedish military records have any indication of an airfield where the discovery was made.

Suggestions and other comments are very welcome.

Thank you, Björn, for letting me be first to publish this discovery and I hope some readers here can provide some clues or even unravel the facts behind these remains. 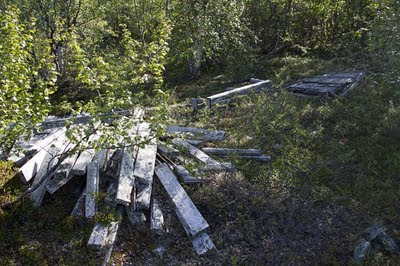 The remains of a building by the airfield. PHOTO: Björn Lundquist
created by Lars Gyllenhaal at 07:33