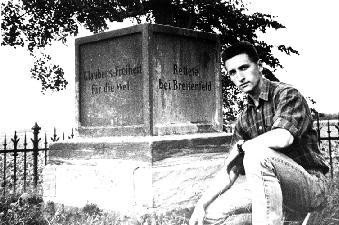 Visiting the Breitenfeld battlefield on September 7, 1991, 360 years after Sweden's perhaps most important battle.

When I walked the Breitenfeld battlefield, tomorrow exactly 20 years ago, it was less than a year since it had been in the state known as East Germany (GDR). This year my thoughts often go back to that trip and my experiences in Moscow also during that year.

I believe it was my paternal grandfather who told me about the role that the first Gyllenhaal, the cavalry Lieutenant Nils Haal, played during the battle of Breitenfeld on September 7, 1631. What he told me astounded me and probably explains some of my interest in wars. Unfortunately I have since not been able to locate written sources that match my memory of what I heard, or think I heard.

We do know though, from 17th century records, that Nils Haal was there, on that field, on that day, and performed well. But exactly what he did I do not yet know for sure.

Many will this week, understandably, be looking back at September 11, 2001. As for me, for some reason I thought more about that day at the start of this year.

I am now more often contemplating what I experienced in 1991, above all the last year of the Soviet Union as a student in Moscow. The most vital part in that was getting to know my future wife Ann-Sofie, another Swedish student there. The no doubt most weird part was finding these two destroyed armoured vehicles on the same street where president Mikhail Gorbachev lived, Kosygin Street. 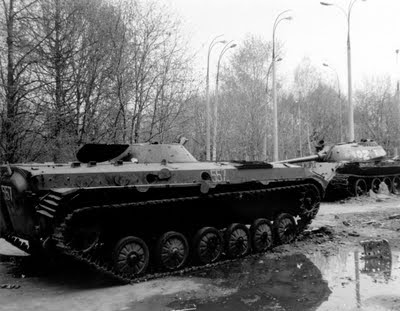 To this day I have found no explanation for the presence of these destroyed military vehicles. Their hatches were open and kids were playing in and around them while we were there, as they were actually standing right beside a school. I reckon they may have been standing just a couple of hundred metres from the Soviet president's residence. If you saw these wrecks in Moscow 1991, or know anything about their story, I'd be very much indebted for your comments. 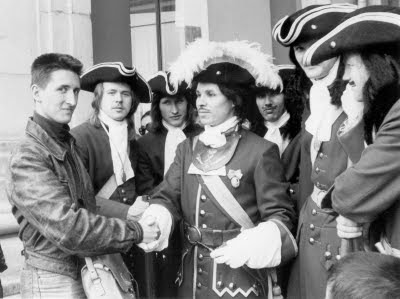 To be on the safe side, I made peace with Peter the Great before leaving Moscow. The gentleman dressed up as Peter was (is?) probably Russia's greatest (not tallest) reenactor of the era of Peter the Great.
created by Lars Gyllenhaal at 10:07