Raiders of the Lost Spear 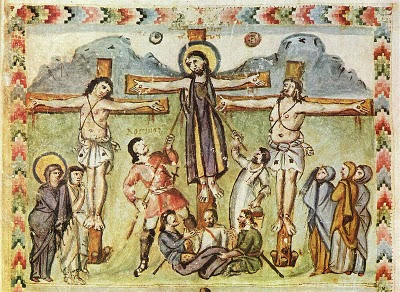 Note the long spear/lance and "LOGINOS" in Greek characters above the soldier who is holding it. This is a crucifixion scene painted in the year 586 and part of the the Rabbula Gospels.

Regular readers of this blog will have noticed my interest in Star Wars (the old ones). Well, it should come as no surprise then, that I am also a fan of Indiana Jones (except the most recent one). I am currently reading a book that makes me think the first Indy film could have been entitled "Raiders of the Lost Spear".

If you haven't noticed, 2011 is the 30th anniversary of the first movie about OSS Colonel Henry Walton "Indiana/Indy" Jones, Jr., Ph.D.. BTW the name was initially Indiana Smith. As I wrote in the foreword for the Swedish edition of The Master Plan (2007) by Heather Pringle, the Indiana Jones movies have effectively communicated the fact that archeology had a high status in the Third Reich. Quite considerable resources were made available to pre-war archeological SS-expeditions to places like Sweden and Iraq.

But instead of searching for the Ark, it seems as if Indy could have been looking for the Spear of Destiny aka the Holy Spear, Lance of Longinus or Spear of Christ. Different names given to the spear/lance that pierced Jesus' side as he hung on the cross. How did I reach this conclusion? From reading The Complete Making of Indiana Jones (2008) by J.W. Rinzler and Laurent Bouzereau it is clear (p. 17) that initially George Lucas had an open mind about which supernatural artifact that was to be the MacGuffin (plot device) of the first Indy adventure. It was Philip Kaufman that brought the Ark into the movie, i.e. the Ark of the Covenant. From Kaufman's own words it seems he got the Ark from "...an old dentist I went to in Chicago who was obsessed with the lost Ark's legendary powers."

Now then, which artifact would Indy have been wanting to find had Kaufman and his dentist not been? Well, the only other artifact mentioned in the first draft for the film is the Spear of Destiny (p. 28 and 30). Thus, although there is no explicit admission that the Spear would have been the MacGuffin, it seems rather probable to me.

By reading The Complete Making of Indiana Jones one also learns more about how the film's sadistic Nazi intelligence agent Arnold Toht was first imagined. He was initially an SS-Obersturmbannführer (lieutenant colonel) with a mechanical arm that could transform into a flamethrower and/or machine gun.

The book also portrays the Flying Wing in both amazing drawings and several photographs, as well that fantasy Panzer of Indy III. Speaking of fantasy tanks, don't miss these highly skilled modellers and especially this thread.

Yesterday the LA Times had some Indy news, Steven Spielberg said earlier that he and George Lucas have discussed a possible fifth Indiana Jones movie. LA Times has Indy himself, i.e. Harrison Ford, talking about this with Spielberg.

Now, considering that Indy has already chased around in Tibet, Italy, South America and the Biblical lands it is high time for Indiana Jones to have a showdown with the SS in Swedish Tanumshede or Himmelstalund. Just two of the places with major rock carvings in Sweden that attracted SS-expeditions. But what about Indy's age? No problem, he does not even have to go back in time - he can fight the SS-division "Schwarze Sonne" due to be activated in 2018 ;-)
created by Lars Gyllenhaal at 11:52