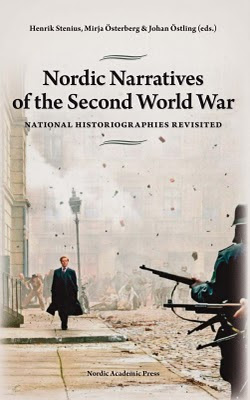 I dig the front cover illustration, from the 2008 Danish movie "Flame & Citron", and the book itself, but the title could have been shorter i.e. better.

Nordic Narratives of the Second World War is a fascinating analysis of what has been written about WWII not only in Sweden, Finland and Norway but also in Denmark and Iceland.

Through this short book (173 pages) eight Nordic historians give you a good idea about how the Second World War has been viewed and is presently viewed in the Nordic countries. They also manage to explore the difference between scholarly and popular understandings of WWII. That difference can be pretty large.

I especially appreciated the Danish and Icelandic chapters, as my knowledge of the WWII history and historiography of these nations is very limited. I was absolutely fascinated to read in Professor Uffe Östergård's chapter about how WWII history played a major role in the debate about Danish participation in the invasions of Afghanistan and Iraq.

The book's Swedish chapter, written by Johan Östling, could have mentioned some more recent themes, such as the Swedish volunteers & sailors of the Allies, Allied troops and bases in Sweden 1943-45 ("police troops" and special operation forces). I am not the only one to have written about these subjects. But Östling at least ends with a short review of John Gilmour's Sweden, the Swastika and Stalin. That book is certainly worthy of mention.

Hopefully more books like this one will follow, focusing more on the narratives that perhaps matter most nowadays, i.e. films and TV-documentaries. Considering that the front cover of Nordic Narratives of the Second World War is from a recent film there should have been more about movies in it. But I reckon it was a good idea to make this first book of its kind a short one.
created by Lars Gyllenhaal at 09:52