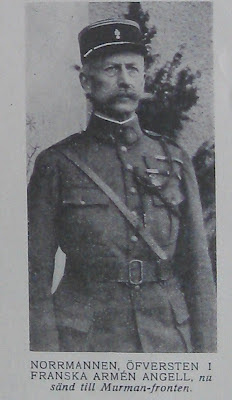 Henrik Angell from Norway joined the French Foreign Legion and fought against the WWI German Army and early Red Army.

Thanks to Henrik L, a fellow Swedish armoured troops cadet in 1989, I recently became aware of a very special Norwegian colonel who volunteered for France in WWI and served her as a 1st lieutenant (was that also his last French rank?).

His name was Henrik Angell and he survived fighting the WWI German Army but not the combat in the Arctic during the Russian Civil War. The above photo of Angell in a 1918 Swedish weekly paper was found by Henrik and states that Angell is on his way to the Murman-front, i.e. Murmansk.

I reckon Agnell must be the oldest Scandinavian volunteer in the French Foreign legion. He was 63 when he joined!

created by Lars Gyllenhaal at 19:40