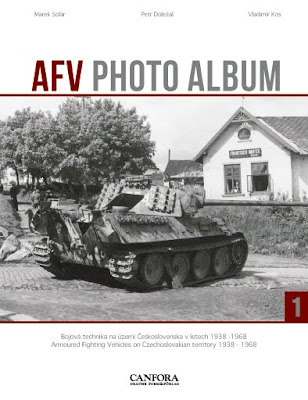 In my post "Nordland Panther in New Swedish Book" I mentioned the young Swedish publishers Canfora. They have since then become an even more interesting English language publisher for Armoured Fighting Vehicle (AFV) buffs and modellers.

Canfora's AFV Photo Album vol 1 is quite simply a treasure trove for AFV buffs and modellers. What you get is 224 A4 size pages with an incredible amount of large and high quality photos of mostly German, Soviet and US tanks and other AFVs in Czechoslovakia, mostly in 1945. I doubt if anyone outside the region has seen any of the book's images from 1945 before. Several photos are ideal for those into restoring or building vehicles and/or dioramas.

I would like to especially mention a photo in the book of a Bergepanther with a 37 mm Flak gun, a probably unique example of late-war improvisation. I was also intrigued by four photos of Jagdpanzers (38) abandoned in May 1945. Inside one of them was a woman in SS uniform, according to the authors. There is no photo of this woman in the book, nor her name, but I find the caption possible as she perhaps was not a regular tanker but someone from a staff, being transported. Could she have been a crew member? Well, considering that there did exist a handful of female Luftwaffe pilots, not impossible.

One of the very few negative things about this book is the main title, as it says too little about the contents. Otherwise it is a goldmine for AFV enthusiasts. 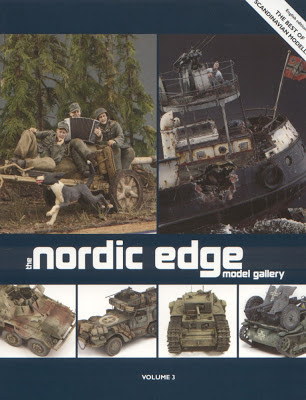 The Nordic Edge series from Canfora is focused entirely on scale models made by modellers in the Nordic countries. However, even if you are not into modelling yourself I reckon these books could be of interest. Because they are simply astounding in their quality. Both the models, dioramas and the quality of the books.

Volume 3 is 143 pages in A4 size with both superb large size photos and text about the thoughts and work behind every subject. It is easy to get inspired by these books, and also to get practical tips from them.

created by Lars Gyllenhaal at 16:10