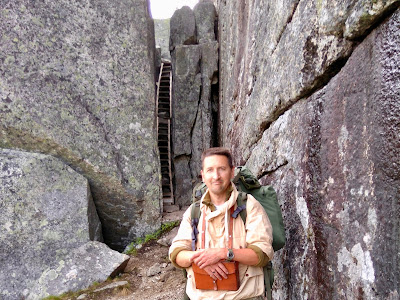 Ropes and an old stair (!) to get to the higher Gebirgsjäger Narvik positions.

This year some friends and I decided to look closer at an area that Mikke and I only had started to explore four years ago. Well, the Narvik mountains again delivered some amazing discoveries plus beautiful scenery and weather.

First a warning, to make sure everyone knows the risks. Even if you do find the odd rope or stairs, please understand that these mountains have almost no signs and well marked paths. If there has been some rain recently there will also be plenty of slippery hard surfaces. The military history that is still to be found in the area is not to be removed and if anything looks like ammunition or some other sort of explosive - then it probably is and should not be touched. Remember that people still today are hurt and even killed by explosive remnants from wars that took place a hundred years ago. In other words, hiking in the Narvik area without a special guide requires that you have common sense, good health, some experience of Nordic hiking, good equipment, navigational skills and maps. To be very clear, hiking in the wilderness without a guide can be dangerous and I take no responsibility for others wishing to do something similar. 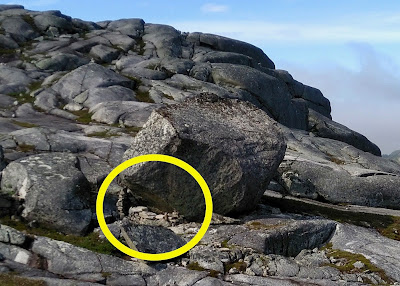 One of the first German resting positions we found, click on it for larger size.

Almost as soon as we got up on the "upper level" of the mountain we chose to explore, Mats made a great discovery - directly linking us to both the daily life of the German mountain troops and to highest command level. What he found is actually so strange that I will save that episode for a coming book. Moving away from the area where many other hikers had been before us, I almost treaded on the remains of a German stick (hand) grenade. To be precise, a model 1924 Stielhandgranate (M24). As you can see from the below image it is in pieces but still recognizable. Photographed it just like we found it, and left everything. I only take photos. 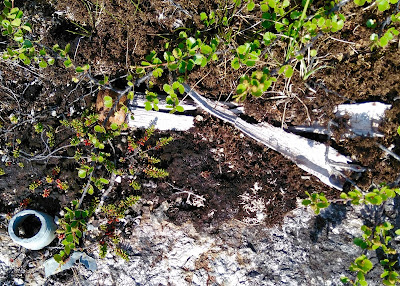 This German M24 stick hand grenade is being absorbed by nature.

Not far from that grenade we made the next find, a position with a really good view down a slope. It was probably abandoned for some serious reason. Still today it contains plenty of unspent German standard rifle ammo. One does not leave so much ammunition voluntarily, so presumably the owner was wounded, killed or in a hurry away from the position. 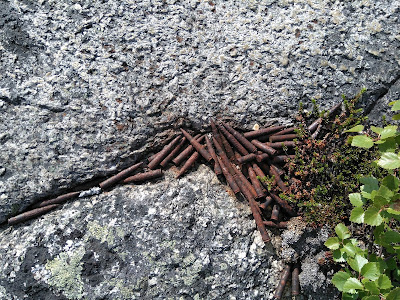 German rifle ammo, left in a position with a view to the base of the "path".

Next, I noticed a natural place for storing stuff. I stopped and carefully looked inside. Two more M24 stick hand grenades with some rifle ammo. As these were all unused I did not even step close, but rather took my photos a bit away. You can't be too careful. 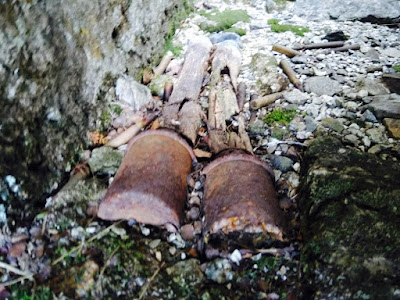 Soon 80 years since a German mountain trooper left these M24s behind.

The final day up in the mountains we found mainly empty positions but also two big concentrations of German ammunition, one very obviously was where a MG 34 machine gun had once stood. Notice in the below photograph the rust on the rock surface. Bear in mind that most of the year this and everything else you see up there is mostly covered by snow. 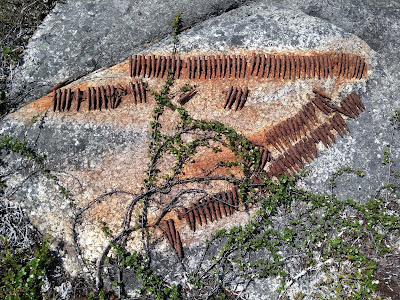 Finally, if some of you are wondering about what I am wearing in the first photo (thanks for taking it, Mikke), it is a British 1942 pattern windproof smock. I have an original smock of this type, from a trade I made some thirty years ago. But I no longer wish to use that piece of history on hikes, so this new replica I got from SMB is both a good stand-in and a very practical garment on warm hiking days. What about the thing I am holding on to then? Well, that is a case for my Swiss Army binoculars - a brilliant piece of kit to really examine landscapes.
created by Lars Gyllenhaal at 15:05