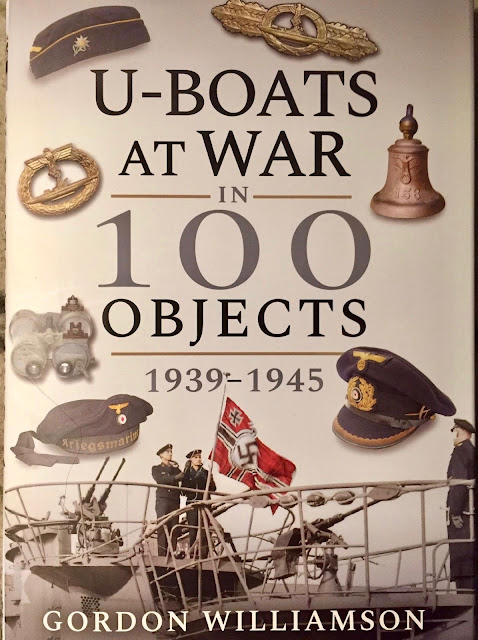 OK, you have seen "Das Boot" and want to know more about the U-boat arm, its submarine types, bunkers, missions, special insignia, awards, aces and downfall. You are also keen to see original artifacts up close. Well, in that case this new book is what you are looking for.

U-Boats At War In 100 Objects 1939-1945 is written by Gordon Williamson and the name will probably ring a bell with many reading these words, as he has written more than 40 books - many about German WWII armed forces. Because of his long experience and not least several visits in Germany he has been able to produce a simply stunning book with 100 short but still rich chapters. Each chapter is illustrated with at least one high quality photograph, often more than one and quite often in colour.

For Nordic readers there are two parts of particular interest: The Norwegian Bases and the Type XXI Elektroboot. The latter is the very advanced submarine type featured on the cover of one of my Swedish language books, as one of these submarines was salvaged by the Swedish Navy and affected Swedish submarine design a great deal. Well, that is not unique, German submarines in one way or another affected all postwar navies.

It is no wonder that the recently taken photos are in high quality colour, but it is quite amazing how Gordon Williamson has been able to find several wartime colour photos that I have not seen before.

Directors of future "Das Boot" films/episodes would do well to purchase a copy of this book, that I will call "Das Book". They should read it carefully and have it handy during filming.

created by Lars Gyllenhaal at 17:39