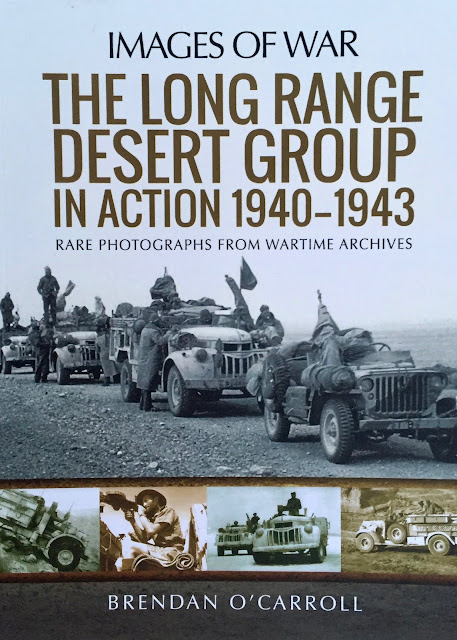 This book is different from most books about the Long Range Desert Group (LRDG) as it contains a great deal of rare or never before published photographs. It includes a lot of details of special interest to military vehicle buffs, special forces insignia collectors and scale modelers.

The New Zealander and LRDG buff Brendan O´Carroll has made this book in the series “Images of War” truly stand out. To start with, most books in this series are thinner. This one is 215 pages long and largely photographs but also some really good text. Sure, it does contain some photos I have seen before – but as Mr. O´Carroll is a true expert who knows how to write informative captions he has added new value to those photos.

The many images in The Long Range Desert Group In Action 1940-1943 were taken both by official photographers and the LRDG men themselves, many come from private photo albums, drawers etc. The quality of the photos from personal cameras is not seldom poor (some have been enhanced), but this can both be forgiven, as they can still reveal a lot, and be explained – the films were often developed in Cairo photo shops with unclean water. The resulting images thus could show not only specks of dust but also hairs and parts of insects. Still, there are also plenty of photos in Brendan O´Carroll´s new book that are clear and sharp. Being Swedish I was particularly happy to find a new and crisp photo of a Bofors (made in Sweden) mounted on an LRDG Ford.

Uniforms and insignia of patrolmen are featured in some superb photographs I have never seen before. LRDG members could certainly look very strange and exotic!

Several images ought to constitute strong inspiration for dioramas, and some of these also feature non-LRDG vehicles and I here have to make special mention of an Afrika Korps Panzerfunkwagen and a Marmon Herrington armoured car of the King´s Dragoon Guards. Simply stunning photos.

Those of you who have read the LRDG book I wrote with Karl-Gunnar Norén may recall the story of Nick Wilder, the LRDG captain who performed a miracle for Montgomery nor far from Tataouine, the town that later became Tatooine in the Star Wars films. Well, sadly we could not locate any good enough photos of Captain Wilder. But Brendan O´Carroll has succeeded in finding some photos of Wilder in preparation for the attack on the Barce airfield. It is just incredible to see these photos.

You might think that the book ends with the LRDG operations in Tunisia – but this it does not! Instead, it follows the desert veterans to their next assignment as part of the Raiding Forces, Middle East, made up of around 200 LRDG patrolmen and 150 men of the Special Boat Squadron (SBS) and No. 30 Commando. In other words the book ends with some photos from Greek Islands. As soon as I saw them I started thinking about visiting these islands in a year or two. The vaccinations have started folks, so let us start planning to visit LRDG sites again – yet another reason to purchase The Long Range Desert Group In Action 1940-1943.

created by Lars Gyllenhaal at 17:41