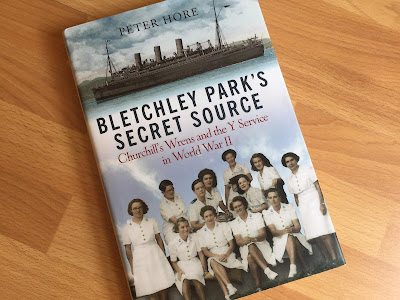 Having read and watched several books/films/TV productions about Bletchley Park (BP) my interest was aroused when I learnt that there was a new book about the little-known network behind the information supplied to Station X (BP). The Swedish Navy is also part of the story.

Let it be said immediately that Bletchley Park´s Secret Source focuses on the very secret Y service that ran a global chain of wireless intercept stations. This new book by Peter Hore, former Head of Defence Studies for the Royal Navy, especially illuminates the Y service Wrens – the operators from the Women´s Royal Naval Service. Thus the subtitle of this book: Churchill´s Wrens and the Y service in World War II. My main reason for reading this book was my interest in the German-speaking Wrens who listened to German radio chatter, but for those of you who are interested in the monitoring of Japanese signals this book is also for you.

While many Wrens of the Y service had zero military experience there were also some really experienced ladies, such as Violetta Thurstan. Not only had she won the Military Medal for her bravery as a nurse in the First World War, she had been decorated by Russia and Serbia as well, had served in the RAF and the Spanish Civil War and therefore spoke several languages and had a good grasp of many military matters – key Y service skills.

Several Y service Wrens had been to Germany before the war and some had spent years there and even seen Hitler himself up close. Such a Wren was Elizabeth Agar, who didn´t know much about the Wrens but as soon as she met a smartly dressed one was intrigued and got a “[…] burning desire to join […] even though my only knowledge of the sea was that it made me seasick”.

In the chaos of 1940 there sometimes was not even time for any training course, not even an issue of uniform! Those times also meant not only listening to the enemy but also observing Luftwaffe aircraft over Britain, sometimes close: “The girls became rather blasé, so they were surprised during a visit by a superintendent from London, when their visitor suddenly jumped into a ditch to take shelter.”

In the book´s chapter “Winning The Big Battles” the Swedish cruiser Gotland´s sighting of the German battleship Bismarck plays a vital role for the British naval attaché in Stockholm, Captain Henry Denham. The part that Denham´s report to London played in sinking the Bismarck is made clear by a personal signal from the First Sea Lord to Denham.

The author writes that “At the height of the war, the Y stations sent more than 3,000 messages a day to Bletchley Park” and it seems natural to agree that this volume must have been a major contribution to the success of BP. The Y service Wrens in Colombo on Ceylon (now Sri Lanka) even helped prevent a second Pearl Harbor. Bletchley Park´s Secret Source highlights a small group of women, often in miserable working conditions, that indeed had a real effect on the war.

created by Lars Gyllenhaal at 14:18