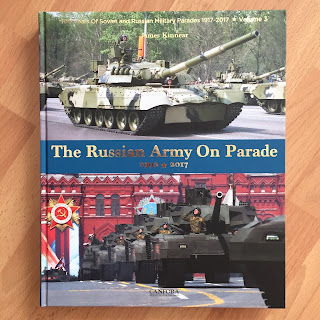 With The Russian Army On Parade 1992-2017 James Kinnear has, with the help of several Russians and a Swedish publisher, produced an impressive three volume encyclopedia of Soviet and Russian military "tekhnika".

Military vehicle (MV) buffs and scale modelers have something to wish for, or treat themselves with. This sequel to The Soviet Army On Parade 1946-1991 of course focuses on the post-Soviet parades on Red Square but also contains a great deal of information and photos of parades in other places, also with restored Soviet WWII vehicles. In addition, it has the best photo documentation I have ever seen of the most serious "demonstration of Russian armour" that occurred in Moscow 1993, when the Russian Federation was on the brink of civil war and the Russian parliament building was destroyed by tank gun fire. No wonder that this part is so captivating, the author was at the time living beside the parliament and a stray 7.62 round came through the author´s elder daughter´s bedroom window.

Thus this is a book not only about glorious parades but actually, especially in the introduction, provides a summary of recent Russian history - that has been more harsh and violent (the wars in Chechnya) than most readers outside Russia realize. The book has some good summaries of actions now largely forgotten, not least involving the VDV, the Russian airborne forces. The post-Soviet rise of the VDV can also be observed in the official parades.

In the most recent years other very interesting themes have become highly visible through parades, such as the growing importance of the Arctic, the Rosgvardia and remote control combat vehicles like the "Uran-9".

Like in the previous two volumes, this volume includes a photo guide and glossary of Russian military vehicle terms, that ensure the lasting value of these books. Like with volume two of this series, I totally or partially disagree with the author about certain passages, not least about Ukraine. But those paragraphs do not concern the main focus of the book. Although I have been a rather fanatic MV buff since the 1980s I learnt a lot from it.

Does The Russian Army On Parade 1992-2017 conclude this impressive portrayal of the world´s heaviest military parades? In a way yes, but not quite, because in 2020 a 75th anniversary victory parade was held, and I am currently reading the special book about that parade and will review it too, in the near future. To check out the recent books by James Kinnear and other MV specialists, visit their publisher, Canfora.

created by Lars Gyllenhaal at 10:41