Confederates in the Arctic

Reenacting the American Civil War is something that is done not only in the United States but also in distant places like Sweden. However, modern Swedes dressed up as Yankees and Rebels is actually not that strange. In fact, just about normal.

I came to this conclusion while writing the passage in Swedes at War about Swedish volunteers and Swedish Americans who fought for the North or South. 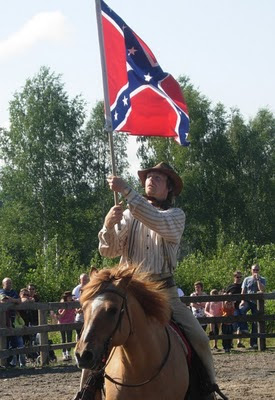 Reenacting at Western Farm in Boden, Sweden. Boden is just below the Arctic Circle. I took the photo some week ago.

For some reason, the Swedish contribution to the American Civil War that is best known in Sweden is probably the USS Monitor, the first US Navy ironclad, designed by the Swedish engineer John Ericsson. But in addition there were several thousand Swedish Americans (many of whom had been born in Sweden) who fought in blue or gray, plus some forty Swedish officers, sergeants, and cadets who left Sweden after the start of the war to join the military forces of the Northern States.

Yes, as far as I know, no Swedish officers joined the Confederates. One of the officers, Ernst von Vegesack, was was even awarded the Medal of Honor (for bravery in the Battle of Gaines´ Mill) and made a US brigadier general.

After having become an American military hero at Antietam and Gettysburg, Ernst von Vegesack returned to Sweden and became chief of a military district. There were, by the way, also some amazing Swedish American Rebel officers.

Three of the Swedish officers who died for the United States are forever honored in Sweden, in the Military Academy Chapel in the Karlberg Castle, where they had completed their officer training.

This summer I got a very personal and moving book about the Civil War from two of my American relatives. I just finished reading it this morning and am really grateful it came into our home. The title is Confederates in the Attic and the contents are perfectly summarized in the Wikipedia-page about the book.

In several ways the book reminded me of one of my absolute non-fiction favourites, The Men Who Stare at Goats. Like the latter, Confederates is a splendid read and great fun, sometimes even hilarious. But quite often also serious, inspiring and never boring.

There are so many things I learnt from the book. One of the least important but most amusing things was the jargon among Civil War reenactors (farbs and hardcores etc) and how the reenacting thing started, with Civil War veterans portraying themselves, i.e. their younger selves, at reunions, then called "encampments". Veterans camped on former battlegrounds, donned their old uniforms and performed mock battles.

The reenacting part of the book brought back many memories as I myself was into this in the 1980s, as a teenager, inspired by British friends. But it was British soldiers we wanted to portray, during WWII. I guess we were hardcore as we almost only had original stuff and did our reenacting mostly where the events that moved us took place, in Normandy.

Of course, nothing is perfect, not even Confederates in the Attic (or my own books!). Judging from this British and this US article and not least this review, it still seems unclear if the sensationally vital Civil War veteran William Jasper Martin was a deserter or not. Please do comment about this as I´d really, really like to know.

BTW, while researching I read the Wikipedia page about Swedish Americans and was glad to see that our most famous American relative is now at the front of Swedish America. And I must confess I had no idea that Uma Thurman and Kim Basinger are Swedish Americans. Thurman is huge in my former homeland Russia, there is even a Russian pop song about her.
created by Lars Gyllenhaal at 10:02