Presenting another photograph of Germans at Narvik that Swedish Air Force veteran Lennart Engerby got already in 1945 while visiting the town. There are some puzzles in the photo...

On our Narvik trip this summer we brought a paper copy of this photo from Mr. Engerby´s photo album: 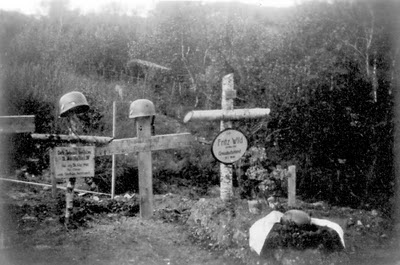 From the left: the graves of Johann Grübler, an unknown soldier and Fritz Wild.

Finding Fritz Wild´s grave today was easy, as all German Narvik war dead are now in one place as far as I know: the main cemetery of Narvik just outside the city centre going north. Thanks to a public grave register, stored inside the stone wall by the German section staircase, we quickly located Wild´s current grave. 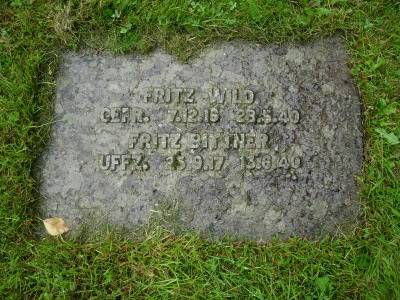 Thanks to internet and some googling I now know more about Wild. He was born in Kapfenberg, Austria. In the army he became a Gefreiter, a private first class. But I do not recognize the place where he was killed: "b. Forsnat". Could someone tell me if the spelling is right?

Presumably Wild died in the same action as Gefreiter Johann Grübler, the man furthest to the left in the top photograph. While visiting Narvik we did not know this latter man´s name as it can´t be made out from the above photo. But again thanks to now googling (should have done it earlier!) I found another photo of the graves, taken from another angle. As that photo is in a forum where photos are not public there is not much use in linking to it, but it is clear from that photo that Johann Grübler belonged to the 11th company of "Geb Jäg Regt 137" i.e. the 137th Mountain Infantry Regiment.

From the forum photo it is also clear that Johann Grübler like Fritz Wild was killed on May 28, 1940. This date connects perfectly to our previous Narvik trip, which was mainly about the Allied amphibious landing on that date.

But why did someone put a Luftwaffe-marked paratrooper helmet on the cross of Johann Grübler if he was in the army mountain infantry? I reckon it was no mistake. Many "paratroopers" dropped over the Narvik area in 1940 were mountain infantry that had received some (I believe mostly almost none) parachute training and Luftwaffe helmets.

It would be good to learn some more about Grübler and Wild, especially more about the circumstances of their deaths.
created by Lars Gyllenhaal at 23:13