Thanks to "Iron Sky" cinematographer Mika Orasmaa I can now provide a photo of the coming film´s stormtroopers. Magnifying the photo I discovered the name of their fictional unit.

Please don´t get me wrong now. I have a license to blog not only about serious books and films. In this case I am writing about a science fiction comedy. Well, if - and that is one huge if - SS-Obergruppenführer Hans Kammler (who was a real person) had somehow managed to secretly set up a SS-base on the moon - which is a major ingredient of "Iron Sky" - what would those national socialist astronauts, or nazinauts, have called their lunar base and its Waffen-SS unit? Well, I must say I totally agree with the filmmakers about their choice. 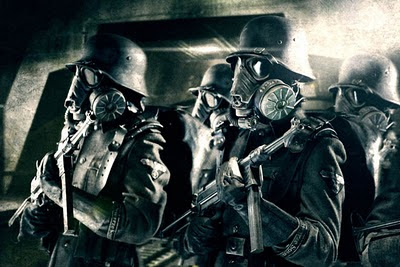 "Schwarze Sonne", i.e. "Black Sun", was the logical choice. The black sun being both the most cosmic and hyped SS-variant of the swastika.

The SS-eagle on the upper left arm of the lunar stormtroopers is not quite WWII-style, but hey, this movie is taking place in 2018! On the other hand the MP 40s look totally unimproved. What, no small-arms development in 73 years!? And those steel helmets look more WWI than WWII... But those Haunebu spaceships look utterly correct, much better than anything I´ve seen before.

Seriously speaking, it will be great to see some more trailers and finally the whole thing. I suspect it will be a treat to watch and at the very least quite entertaining. Could it even have some serious message as well?

Yes, I do have a special interest in the esoteric side of the SS. I have not yet written much about this but I have collected books on the subject for years and thus was given the opportunity to write the preface for the Swedish version of The Master Plan, Heather Pringle´s groundbreaking book on the Ahnenerbe and related themes. This is the Swedish cover: 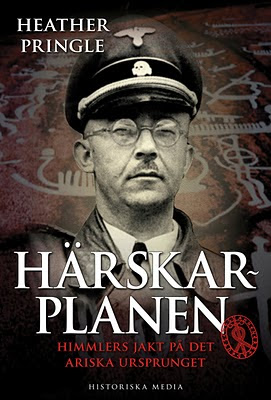 "Härskarplanen" is the Swedish version of "The Master Plan" by Heather Pringle. Unlike the English-language cover, the Swedish one features the rock carvings in Tanum, Sweden. These carvings attracted great attention by the "Ahnenerbe" and a chapter of the book is about them.

Now, if you want to learn more specifically about the black sun symbol, I want to recommend a book and documentary by German author & filmmaker Rüdiger Sünner. Both are called Schwarze Sonne. The book has unfortunately not yet been translated but the documentary is available on DVD with subtitles in English. You can check out all of Sünner´s books and film productions on his website.

BTW there is a Swedish connection to Sünner aside from the Tanum rock carvings, Sunner has also examined the late Swedish UN Secretary-General Dag Hammarskjöld, whom I recently mentioned.
created by Lars Gyllenhaal at 13:37