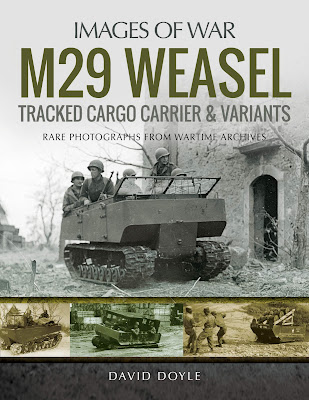 The cover is great but does not inform about the superb colour photos inside.

Large-scale Allied raids against the Germans in Norway were the main motive for the development of the small tracked vehicle that became known as the M29 Weasel. This new book about the M29 by David Doyle tells the Weasel story better than everything I have previously read on the subject. Add to that many great photos.

The large-scale raids were basically dropped, but the development of the Weasel continued and it came to be deployed in many European and Asian countries during WWII. The service did not end there, it became an important snow vehicle in postwar Scandinavia and also served in the Korean War. The new M29 book by David Doyle tells the story of the development and service of the Weasel family of vehicles mainly by means of photographs with excellent captions. The photos are mostly of very high quality and I have seen few of them before. Doyle also informs about many prototypes, some really funny-looking that I was totally unaware of.

The cover says nothing about the many nice colour photos inside. These are mostly modern images, showing preserved Weasels with all the details you can wish for. These, like the wartime photos, should be very much appreciated by both military vehicle owners and scale modellers. Even if you are neither a MV owner or modeller but "only" interested in the history I think you will like this book a lot.

created by Lars Gyllenhaal at 16:24