The Great Escape With Many Nordic Details 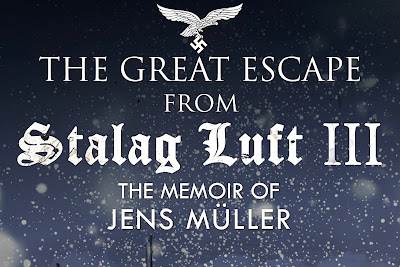 Only now, 73 years after the Norwegian release, this book can be read in English.

While The True Story of the Great Escape tells the story of all those that took part in the action that became the hit movie "The Great Escape", this new book is the personal account of Jens Müller, one of the only three men who made it all the way to freedom - in his case freedom was in Gothenburg, Sweden.

Jens Müller had no ordinary Norwegian childhood but a very exotic one, and was thus perhaps destined for an unusual fate during WWII. He was born in Shanghai, China, the son of a Norwegian engineer and a British actress. Müller got a pilot's license while he was still a teenager and was studying in Switzerland when the war broke out. In May 1940 he arrived in England (he should have written more about his motives but with a British mother he had at least one extra motive) and two years later he was an officer in 331 (Norwegian) Squadron at North Weald in England. On 19 June 1942 his Spitfire was shot down by a Focke-Wulf Fw 190. He survived landing in the sea and managed to paddle ashore in Belgium but was soon caught.

Müller´s work for what became known as the "great escape" consisted not least in constructing an air pump for ventilation of the escape tunnel. I do not wish to spoil your reading experience but think I can remark that Jens Müller mostly was treated well by the Germans and initially had no problems escaping. But, just like in many thrillers, he did indeed encounter some tight spots before finding some friendly Swedish sailors. Then two very bad things happen...

The reasons why Jens Müller´s escape was ultimately successful are quite clear from his book. Luck, or whatever it is, always plays a role - but Müller´s home run was perhaps mainly the result of [SPOILER ALERT!] superb intelligence work, amazing planning, some very convincing forged papers and finally some really good nerves.

The Swedish sailors that made the final leg of the escape possible are described rather well, but sadly without their names. They were supposed to get rewards from British authorities, but it is not clear if they got them, nor what their reward was. Does anyone reading this know more about rewards for helpers?

Film buffs will appreciate that this book makes clear how the actual escape differed from the famous movie. This first English language edition of Müller's memoir includes several very good comments by Norwegian historian Asgeir Ueland as well as a preface by Jens Müller's son Jon.
created by Lars Gyllenhaal at 19:55