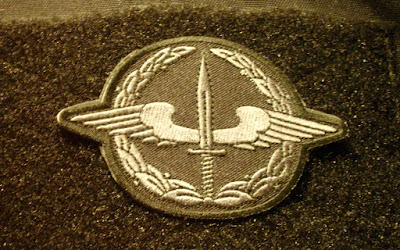 The new edition of my book Elitförband i Norden (Swedish for Nordic Elite Units) will be released in the book stores in a few months. As it does not cover police forces (as stated in the book´s introduction), I am here posting an overview of these units and am at the same time reviewing European Counter-Terrorist Units 1972-2017.

As I promised in my review of Fighting the War on Terror, I shall now review a book focused on the equipment and insignia of Europe´s specialists in striking against various terrorists. The book in question is an Osprey guide first released in 2017, entitled European Counter-Terrorist Units 1972-2017, written by Leigh Neville and illustrated by Adam Hook. While I am no expert in police matters I can still say that I perceive this book as very useful for anyone interested in how these units look and are equipped. It also gives an idea of their training, tactics and techniques.

The book first provides a picture of how terrorism has evolved since the 1972 milestone terrorist attack in Munich. The main change since the 1970s and 80s: ransoms and political demands have been more and more replaced by a simpler desire for mass casualties, often combined with "martyrdom" for the terrorists themselves. A major technology change within the European counter-terrorist (CT) units is the emergence of new CT tools like unmanned aerial vehicles (UAVs) and unmanned ground vehicles (UAGs). Another equipment development is how many more weapons CT units now can choose from, not only from Germany (mainly Heckler & Koch) but also from countries like Russia. An example: French RAID teams use Russian Vepr-12 shotguns (looks basically like a Kalashnikov assault rifle) and Adam Hook has made a superb illustration showing a RAID operator wielding one of these.

While I reckon Leigh Neville has done a great job covering the largest European CT units, he has fewer words and no illustrations for the Nordic states. Still, he does provide sections about Nordic CT units: Denmark´s AKS; Finland´s Karhu (Bear Group) and Norway´s Delta. Sadly, there is no section about Sweden´s NI but the unit is mentioned in the section about the ATLAS network, as NI is a member of ATLAS. Well then, what more is nice to know about Swedish CT capability? NI stands for Nationella insatsstyrkan and simply means National Task Force. It is a unit primarily for CT and within the National Operations Department. However, NI is not the only special ops/SWAT unit of the Swedish Police. There are two more levels, first the Förstärkt regional insatsstyrka (FRI), meaning Reinforced Regional Task Force, and finally "just" regional task forces (i.e. not reinforced).

European Counter-Terrorist Units 1972-2017 is, like most Osprey guides, a very useful and concise guide, but has too little info about Swedish units.
created by Lars Gyllenhaal at 19:31