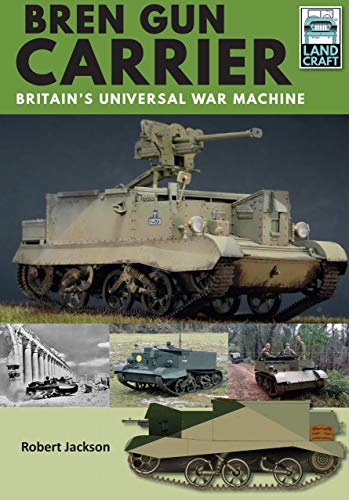 Let me immediately confess that I have been wrong about the Bren Gun and Universal Carriers. For some reason I until recently thought it was a simple, dull type of vehicle. I have been VERY wrong.

Last year I reviewed a previous Land Craft series book about a more universally (forgive the pun) appreciated vehicle, the Jeep in SAS & LRDG service. Now it is time for Robert Jackson´s book about something of an armoured equivalent of the Jeep. Bren Gun and Universal Carriers did not only serve in every theatre of WWII, they were also produced in several countries. I had been aware of the Canadian Universal Carriers but have now, thanks to Jackson´s new book, learnt also of the US, Canadian and New Zealand Universals.

Carriers not only had machine guns, there were some with artillery and anti-tank weapons mounted on top - both in Allied and German service. Yes, the Germans used captured Universal Carriers, and that is how I came to develop an interest in them. The thing is that I last year discovered that German trains transported i.a. a Carrier from a Swedish railway station (Haparanda) to an unknown destination in Norway or Germany. The vehicle in question may have been captured at Dunkirk and then sent to serve with a German unit somewhere in Lapland. There definitely exist photos of Universal Carriers in German Arctic service, in Kari Kuusela´s book Panzers in Finland. Why at least one Carrier (there is only one in the photos) was transported by the Germans via Sweden is not known. While Robert Jackson´s new book has not solved this mystery it does have some photos and colour drawings of Universal Carriers in German service.

Especially scale modellers and MV buffs will appreciate Bren Gun Carrier - Britain´s Universal War Machine, because it contains the best photos I have ever seen of many different scale models of the type. Several of the scale models also carry all kinds of equipment and some are part of magnificent dioramas.

The combat performance of the Universal Carrier is not the main focus of this book - but it does provide examples of the type´s strengths and weaknesses. There are some surprising examples of actions with Carriers. While the section about Carriers in conflicts after 1945 is not long, it is certainly interesting. BTW I hope to rather soon visit a Carrier abandoned in an Arctic forest.
created by Lars Gyllenhaal at 22:09