The Americans From The Ardennes To VE Day 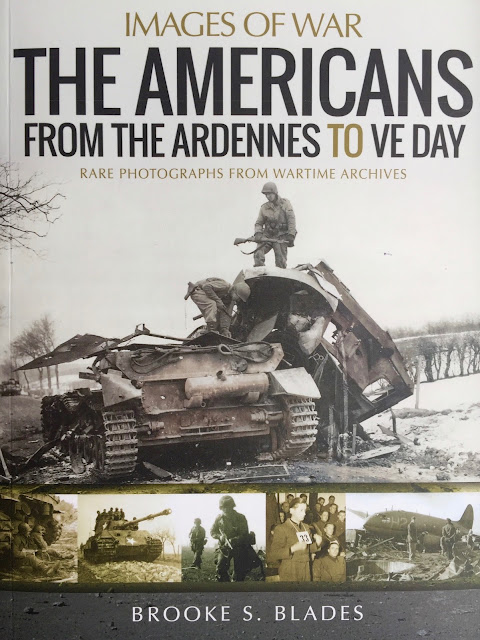 Highlighting US and German troops in the Ardennes and Operation Varsity.

Last year I reviewed another book by Brooke S. Blades, The Americans On D-Day & In Normandy and I found it to be better than I had expected. What about this new book by Mr. Blades then?

Well, the amount of photographs in The Americans From The Ardennes To VE Day is again unusually high, and the photos are generally large and nicely reproduced. This time the book consists of 256 pages and the focus is mainly on the Ardennes i.e. the Battle of the Bulge and to a lesser degree it is about the Allied advance to the Rhine, the airborne operation called Varsity and the final days of the war in Europe. There are several stunning images I have never seen before and the captions are often more informative than normally is the case. Several photos should be able to inspire modellers and reenactors. Some are also quite puzzling, like a British 6th Airborne paratrooper during Operation Varsity, who is wearing several American uniform items. Could he in fact be an American para? Hardly, because his helmet and Sten Mk V ("commando" type) are both British. Thus I reckon the man is either a British or Canadian para.

The text provides views from all ranks and my favorite is a quote from Alfred Jodl that shows just how deluded he was about how British and American soldiers thought. The evaluation of Operation Varsity, a huge airborne operation in which Swedish volunteer Erik G:son Lewenhaupt took part, is sobering. Was Varsity really that necessary? By the way, British airborne volunteer Lewenhaupt is not mentioned in this book but he is in three of mine. James Gavin´s insights about the attitude among regular US infantrymen at the end of the war are also a highlight in the text.

In case you are new to collecting books about the Battle of the Bulge, that constitutes half of this book, you will probably be very pleased with The Americans From The Ardennes To VE Day. If you, like me, already have many Ardennes books, you will recognize several photos from previous books and articles. But, because of the strong images I had not seen before I "forgive" the author for having included those classic photos.
created by Lars Gyllenhaal at 11:22