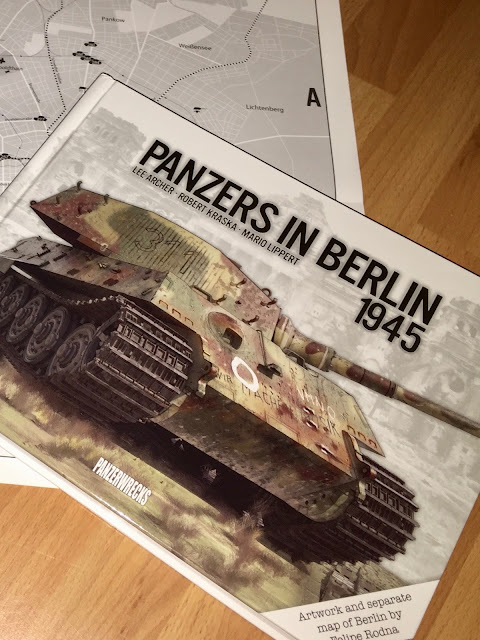 392 pages of exactly what the cover says. The most amazing Panzer book ever.

If you like me have been collecting armour books since the 1980s it will take quite a lot to be surprised. But with Panzers in Berlin 1945 the surprises are MANY. The book is so rich that it is hard to summarize what is most baffling.

Not only does the book contain hundreds of black-and-white photos of Tigers, Panthers and more rare AFVs (some extremely rare), it even has some colour photos from Berlin 1945 I have not seen anywhere before, plus a large separate map showing where in Berlin most pictured AFV wrecks were situated. The total number of photos in the book is 360 and in addition it has 16 colour artworks of the highest quality. There is also a time travel aspect, as many pages include QR codes - one just points a smartphone camera at the code and then one sees the location as it is today in Google Street View.

The armour aside, the book provides a sense of the conditions in Berlin in April and May 1945 as well as during the first months after the war. Because in many photos you also get to see the everyday life of both soldiers and civilians from several states. So, a special interest in the last days of the war in Europe is also a motive to get this book.

The German Heer, Luftwaffe, Waffen-SS and Volkssturm units that employed AFVs and other vehicles in Berlin 1945 are the main focus of the text and many, many names of tankers and other soldiers appear. Very few people will previously have seen many of the included photographs. When occasionally previously published photos do appear they have better captions than before and generally speaking all images are perfectly reproduced and large. The text, like the photos, is full of news even for those with a special interest in Panzers.

Let me mention some of the rare vehicles pictured in this book: Panzerjäger B IV Ausf. B, Wilton-Fijenoord armoured car and the gepanzerter Munitionsschlepper. Soviet AFV buffs also get to see some Red Army vehicles in Berlin. The bloody reality of war is in no way censored, some images might well illustrate pacifist brochures. Quotes from veterans of the Battle for Berlin are of course included. Being from Sweden I must of course also mention that the units with Nordic volunteers are on several pages.

I can not imagine a better book if you want to study the last battles with WW2 Panzers, and how the battleground looks like today. Panzers in Berlin 1945 by Lee Archer, Robert Kraska and Mario Lippert is a gold mine for WW2 buffs planning to visit Berlin. The price of the book might seem high, but once you have the book and realize how much research is behind it, and see how well it turned out, the price is almost low. The book can be purchased in several places but my favourite is Canfora.
created by Lars Gyllenhaal at 14:40