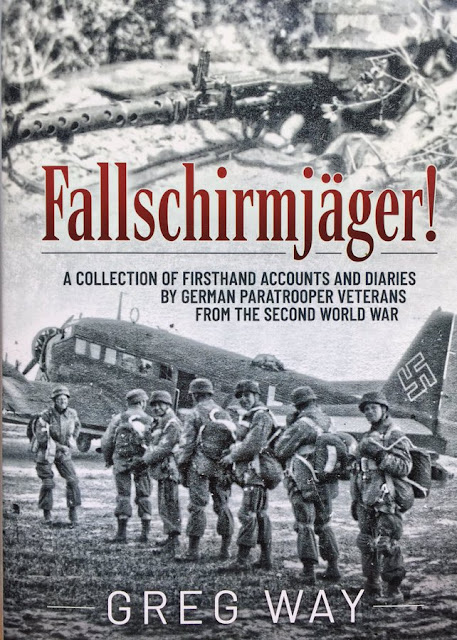 From Norway to Crete, German WWII Fallschirmjägers i.e. paratroopers made a strong impression on the battlefield. The new book Fallschirmjäger! by Greg Way has a personal focus, it lets the reader get to know 18 German paras - mainly their frontline memories but also what they experienced in captivity.

Royal Navy veteran Greg Way started corresponding and then meeting with German paratrooper veterans more than twenty years ago, and his book is the result of these years of contact. While Mr. Way has chosen to concentrate on the history of the individual rather than the unit, he does begin his book with a good summary of the Luftwaffe paratrooper operations and campaigns, and a useful glossary of relevant terminology and abbreviations.

Having lived in the Netherlands and last year written a chapter about how German paras met some rather stiff resistance from Dutch cavalrymen in Landsverk armoured cars (from Sweden), it was of special interest to me to read about the invasion of the Netherlands from the perspective of Kurt Schulz. His recollections are the most gripping I have so far read about that operation. I only wish there had been some more paragraphs about his later service with the 14. Luftwaffen-Feld-Division by the Arctic Circle in Norway. Although this part is not even a page long it contains some highly interesting details and a photo from Norwegian Nesna that make me want to find out more about this little-described division.

The memories of captivity i.e. POW camps are surprising. For example German paratrooper veteran Wilhelm Schulte reported that German POWs in Arkansas were treated well and when one of them died the man was given a proper burial outside the camp that included full military honors from American soldiers.

Combat on Crete is covered i.a. in the chapters about Josef Jendryschik and Bernd Bosshammer. Russia, Monte Cassino and other actions in Italy are covered in several chapters. The book contains an unusually high amount of private photographs, some modern photos of equipment and battle sites plus other types of illustrations like drawings and documents.

To sum things up, Fallschirmjäger! gives the reader good insights into the wartime service and captivity of a cross-section of German paras, and should be of special interest to those researching Crete and Monte Cassino.
created by Lars Gyllenhaal at 18:39