Essential Study of Foreign Volunteers in the Waffen-SS & Wehrmacht 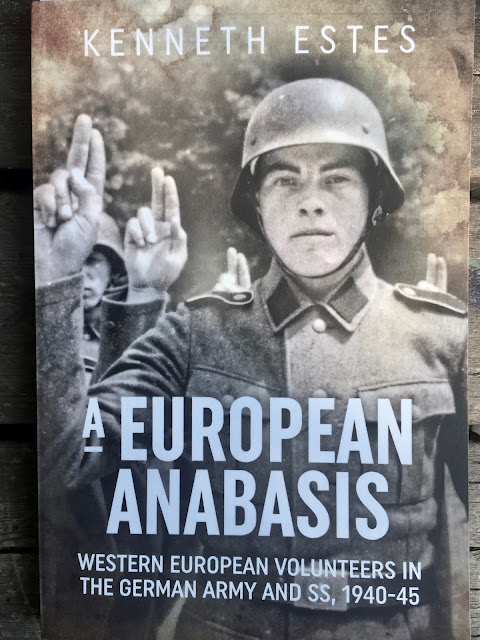 There are lots of books about foreign volunteers in the Waffen-SS and not as many about the foreigners in the Wehrmacht. What makes A European Anabasis unusual is that it looks at both categories, and contains a lot of credible military analysis.

Last year a paperback version of A European Anabasis: Western European Volunteers in the German Army and SS, 1940-45 by Kenneth W. Estes was published by Helion & Company and it is this version of the book that I shall now review. Unlike many books about foreign volunteers in German formations I would say it treats Wehrmacht and Waffen-SS volunteers with equal attention and the author´s background as a marine, tanker (lieutenant colonel) and professor of history has made possible a convincing evaluation of how the different volunteer groups actually performed. The volunteers from Spain, the Netherlands, Belgium, France, Denmark and Norway (I have placed them in the order of contingent size) are the main focus, and this is a good choice by Estes, in my opinion. Sure, there were also groups from several other Western European states, like Switzerland and Sweden, but as these groups never reached anything even close to the number of Spaniards and Dutchmen etc their significance for the battles of WWII was, basically, microscopic.

Well then, two-thirds of the West European volunteers in German formations came from Spain and the Netherlands. Kenneth W. Estes does, however, on occasion mention both Swiss and Swedish volunteers and in one case highlights a Swiss national, Dr. Franz Riedweg, as he was a key figure in the Waffen-SS recruitment program aimed at Germanic populations.

The author in no way hides the fact that Volksdeutsche from Eastern and Southern Europe played the major role in alleviating the mostly unsuccessful recruiting in Western Europe, especially in Scandinavia. Here the author could have inserted a quote from my co-author Lennart Westberg about how dissatisfied Hitler was with the low Swedish turnout, barely 200 men.

In the Netherlands the recruiting drive had a rather different level of support. Even the former Dutch Army Chief of Staff, General Hendrik Seyffardt, lent his prestige for a Dutch national “legion” under German SS command. However, it should be noted (as Estes does) that Anton Mussert, leader of the Dutch collaborationist NSB, was too optimistic about Dutch willingness to volunteer for German frontline formations.

Speaking of the frontline, the Wehrmacht´s Spanish Division experienced over three thousand (!) casualties in the fighting at Krasny Bor and the Izhora alone.

Although Estes has concentrated on understanding the fate of contingents and units, he also presents fascinating details about individual volunteers - men that mostly went down with the Third Reich but in some cases also became rather successful, like the first commander of the Spanish Division, General Augustin Munoz Grandes. In fact, Munoz Grandes became the second-ranking man in the postwar Franco regime.

Of the book´s 50 photos and paintings most are interesting and often depict Spaniards and Belgians (Walloons). In addition there are 15 useful maps.

A European Anabasis remains an essential study to better understand the complicated German use of foreign volunteers from Western Europe, and their actual military/political value.
created by Lars Gyllenhaal at 14:48