From Averting Another Armageddon To Losing Norway 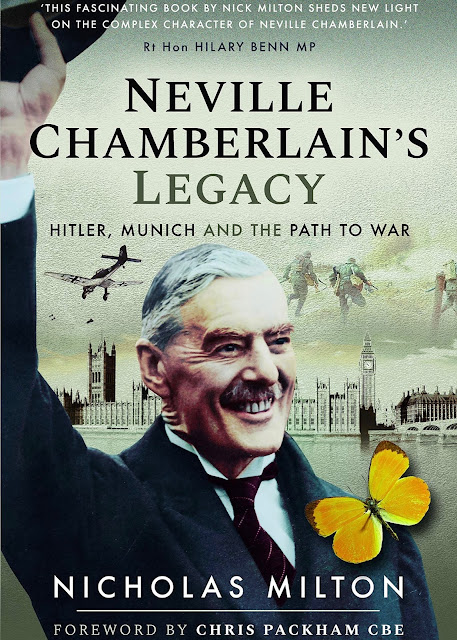 You probably have read a number of books about Winston Churchill, and seen several films about him. There is now even a decent Churchill biography in comic book format - that I have previously reviewed. But Churchill was not ”the man who averted another Armageddon”. Those words were about the man most associated with appeasement policy, Neville Chamberlain.

Military and natural historian Nicholas Milton has written a very readable biography about “the architect of appeasement”, Neville Chamberlain´s Legacy, and not far into the book I started thinking of it as a good foundation for a TV series. Like no other book, Milton´s book (his first!) captures the incredible and genuine popularity that Chamberlain experienced following the signing of the Munich peace agreement on 30 September 1938. The prime minister who sincerely believed he had thus secured “peace for our time” soon thereafter received 20,000 letters and telegrams from a grateful public. To say that he was greeted like a rock star just after Munich is something of an understatement. More precise would be to say that he was treated like the Beatles. Even the royal family showed him unprecedented respect, also in public.

Nicholas Milton has found such a wonderful illustration that says a lot about the immense enthusiasm for Chamberlain and his policy – a photo of a Chamberlain doll that was actually produced, to cash in on the general mood in 1938. The name of the product was “Chamberlain the Peacemaker”. I believed that such dolls, mainly of Hollywood/TV stars, only appeared in the 1950s. I was wrong.

But Milton also lets the reader sense the completely different mood in the state that was sacrificed at Munich. The prime minister of Czechoslovakia even called his new task “a duty which is worse than dying”.

The British media was during these days almost totally focused on the peace that a large chunk of the world thought had been secured by Chamberlain. Especially in the UK Chamberlain was the man who had averted another huge war in Europe. Here is what Nicholas Milton writes about one of the few British newspapers that contained a different take, the Manchester Guardian: “Their diplomatic correspondent presciently reported, `[Hitler] will be master of Czechoslovakia´s main defences, and there is nothing to stop him from making himself master of all Czechoslovakia in the course of time´.”

How did Chamberlain then handle the outbreak of war in Europe, less than a year after Munich? This is where the book gets most interesting for us readers in Norway and Sweden. Nicholas Milton shows how Chamberlain viewed the Norway campaign, how especially impressive the German air component seemed to be. Here, as a reader in Scandinavia, one would have wished for some more pages. Still, this is an important source to better understand how the “strategic withdrawal” from Norway for most members of parliament was more of a “humiliating defeat”, and how this perception very much put an end to Chamberlain´s career.

Two major surprises in the book that I also feel I should mention are Chamberlain´s fanatical birdwatching, and how – as one of his last acts as a statesman – he was crucial for the creation of the Special Operations Executive (SOE). An international movement for German-occupied countries that was a total contrast to regular armies, and to the image of Neville Chamberlain. There really is a lot more to him than his, at the time, extremely popular policy of appeasement. Historical TV drama producers ought to contact Nicholas Milton as soon as possible.

created by Lars Gyllenhaal at 10:33