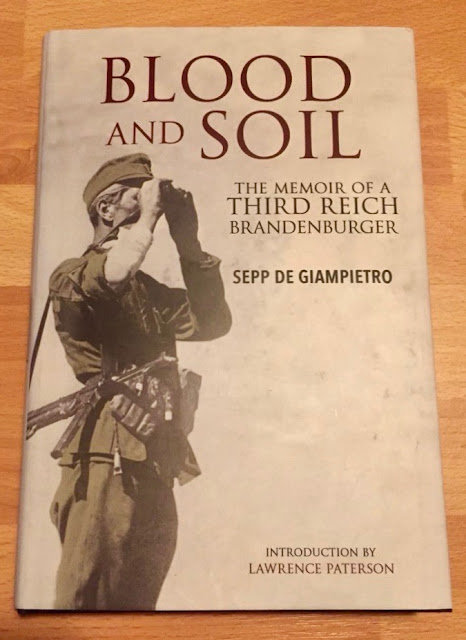 The special forces of German WWII military intelligence, the Brandenburgers, are not as well known as the British SAS, but just as interesting. However, I have to confess that the title of this book made me think that it would not be as well-written and credible as it turned out to be.

To me the title Blood and Soil somehow signalled propaganda. Still, I was very curious to read this book as the sources about the Brandenburgers are not that many, especially the good books are few. There are many misunderstandings about the Brandenburgers. Indeed, as Lawrence Paterson writes in his introduction: "What wartime records remain are often fragmentary or cloaked in cover names, leading to frequent misdirection and confusion. Many operations attributed to the Brandenburgers were either non-existent, or in fact carried out by other units of the Abwehr [German military intelligence service] or SS."

The name of the author of Blood and Soil, Sepp de Giampietro, sounds Italian and this is because he came from the German ethnic group in South Tyrol, Italy. One learns a great deal from this book how this group viewed both Fascist Italy and Nazi Germany. The punitive measures that Italy directed against the ethnic Germans proved to be very counterproductive.

Initially the author thinks he has joined the German mountain infantry/rangers, the Gebirgsjägers, and is satisfied with that. But after a while his unit is attached to German military intelligence and quite a few South Tyroleans thus became Brandenburgers. The first period of the author´s military training is described with some nostalgia, in spite of what followed.

The key element of the special forces period of Brandenburger history (their status changed) was the wearing of foreign uniforms and use of captured vehicles, to enable complete surprise at bridges and other crucial objectives. The author very seriously discusses how he and others felt at the time about wearing different foreign uniforms. He also explains how the most important fighting unit was not the company but the commando, an unusually large and autonomous platoon.

The details are rich and fascinating about the German campaign in Greece 1941, the author was among the very first to reach the flagpole of the Acropolis. Then one gets to follow the author in the Soviet Union, up to the Caucasus mountains. The author writes well and not without humour. He is able to give a vivid idea of how things then appeared, how he viewed events at the time. But also shows in several passages how he came to change his views, not least regarding the policies of the Third Reich.

There are 30 photographs in the book and most of them are of great interest although not all are sharp. I would have liked more pages about 1943-45 but that does not really affect my verdict - this memoir is of great interest to all with an interest in special forces and especially in the history of the Brandenburgers.

created by Lars Gyllenhaal at 17:29