The Most Amazing Tank Destroyer Ever 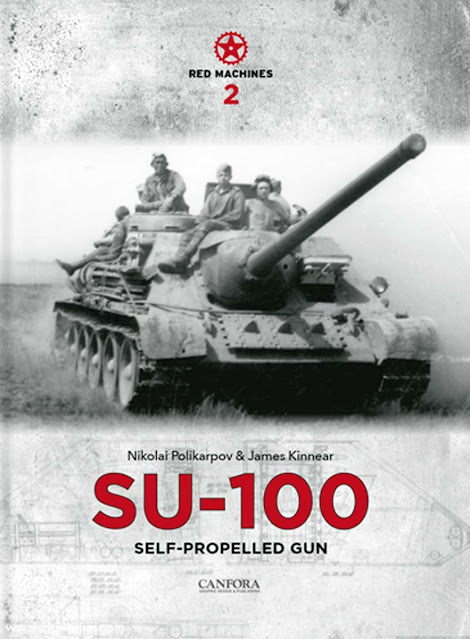 Which tank destroyer can be called the most effective? We could probably debate that forever. However, I find one tank destroyer a bit more fascinating than the rest. Not least because after 76 years it is still in service. There is now a brilliant book in English about it.

Both the Third Reich and the Soviet Union produced some larger and deadlier tank destroyers than the Soviet SU-100. But in the Red Army the SU-100 was the most powerful medium tank destroyer. At medium ranges it could take out both Panthers and Tigers, even King Tigers. So, why has not that much been written about the SU-100 in English? Well one reason is that it entered service only in the fall of 1944. Another being that you basically have to be Russian and work in Russia many years to produce a book like this. Well, half of the pair behind SU-100 Self-Propelled Gun is Nikolai Polikarpov, chief editor of M-Hobby, a Russian modelling magazine which has been in publication since 1993. I read several of the first issues and still have them. Mr. Polikarpov´s research is one reason this new book is a dream come true for Soviet era AFV modellers. But it is also rich in details for military vehicle buffs. There is no detail of the SU-100 that is not featured, also in splendid colour photographs. The other author of the book, James Kinnear, has brought with him long experience of writing on military subjects, e.g. for IHS Jane´s defence yearbooks and Osprey Vanguard. In addition, the Swedish publisher, Canfora, has done a splendid job presenting the work of the authors.

The combat debut of the SU-100 took place in Hungary in the first days of 1945. Here one of the few problems with the vehicle instantly became obvious, it lacked secondary armament, i.e. machine guns. This of course meant that to defend the vehicle against German infantry the crew would largely have to rely on personal small arms (SMGs) and hand grenades. The passage about the German documents about SU-100 employment in Hungary is sobering, evidently both combatants misidentified each others AFVs.

The pages about SU-100s in post-1945 service are amazing if one is also a Cold War history buff. In Soviet service the type was formally taken out of service in 1968. But that was not the end, as it then entered “strategic reserve storage” and was at least returned to some active service during the 1980s. The Soviet forces in Afghanistan used SU-100s to knock out resistance fortifications.

There are amazing sections about the SU-100 in Czechoslovak and Cuban service. In 1961 both SU-100s and T-34-85s were in combat against the American sponsored landings on Cuba. The photos from Cuba should also inspire any Cold War modeler, a great deal.

Then there is the story of the SD-100 (Czech-made SU-100) on display in the UKs fabulous Tank Museum at Bovington. I had no idea that it is one of several SD-100s knocked out by British paras in Egypt during the 1956 Suez Crisis. In general, the info and photos about preserved SU-100s and SD-100s is one of my favourite parts of the book.

The most remarkable thing, in my view, is the fact that several SU-100 again entered combat in 2014, when several companies of SU-100s were employed in the Yemeni Civil War. Accordingly, the last of the excellent colour profiles in the book shows a SU-100 in 2017, captured by Houthi rebels from government forces. During the Yemeni Civil War a number of SU-100s have of course been destroyed, but in 2020 at least one SU-100 remained in operation.

The photographs in the book showing the SU-100 in operational WWII service are not that many, but on the other hand they are mostly of very high quality. I am especially fascinated by the image from Berlin April 1945 with two officers in British or Polish uniforms – the perfect subject for a small diorama.

This book is so new it even contains photographs from the 75thanniversary Victory Parade in Moscow 2020, when no less than seven working SU-100s paraded across Red Square. SU-100 Self-Propelled Gun is the second in the series “Red Machines” from Canfora. The first was T-60 Small Tank & Variants.

To sum things up, this is the way.

created by Lars Gyllenhaal at 14:36