Since a couple of years I have worked as a guide for the Swedish Tourist Association (STF) in the Abisko-Narvik area, taking groups to WWII sites. During this year´s tour we experienced both snow, history and the Norwegian fjords at their best. Perhaps it was the last year to see the warship Georg Thiele?

Abisko in Arctic Sweden is a rather natural (and beautiful) starting point for a WWII tour if you are coming from Sweden. Since last fall there is a museum in Abisko itself about the military history of the Swedish-Norwegian border area, the Border Defence Museum of Abisko, part of the larger Defence Museum of Boden.

Here are some of the battlefield finds displayed in the small but interesting Border Defence Museum. Most of these items were picked up in the 1960s by Swedish rangers: Danish Madsen machine gun magazine and German flare gun with cartridge ("use before June 30, 1946") from the fighting around Björnfjell in 1940. Click on the photo for details. 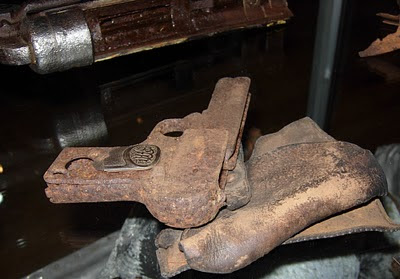 Belgian (?) pistol with holster from the Narvik area. Who knows more about it? Could it be a private purchase by an officer? Above the pistol a German MP 40 can be seen.

Moving on towards the border itself a natural first stop is the railway station in Vassijaure, where a Swedish armoured train on its very first day in service got involved in a duel with a German airplane, resulting in the loss of one Swedish soldier, antitank-gunner Sven Sjöberg from Piteå. Since 2002 there is a monument to his memory on the station. On the outer walls of it, mainly facing north, there is some writing (graffiti) from WWII done by soldiers.

Our next stop was the remains of the Junkers Ju 52 just barely within Sweden, see previous post. While studying this wreckage we were actually walking on snow, and it was just the first of September...

Moving on into Norway, i.e. Björnfjell, we saw several ex-German buildings and studied the same Norwegian (?) soldier´s bowl and German Marschgetränk that I had found some weeks earlier during my private visit.

We then checked out four of the "caves" (manmade) in the area and were glad to see that the pieces of uniforms (some probably from foreign slave workers, prisoners of war) and even paper from 1943 was still in situ. It is my hope that these things will be left in place for many more visitors to see. 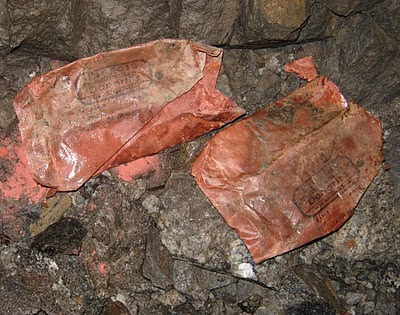 Mostly empty German parcels for explosives (Donarit) dated 1943. Click on the photo to see the writing.

The second tour day we spent partly on the deck of a ship that took us to the very end of the Rombak fjord, Rombaksbotn. After a quick walk there we sailed to the last German warship still above water, the destroyer Georg Thiele. 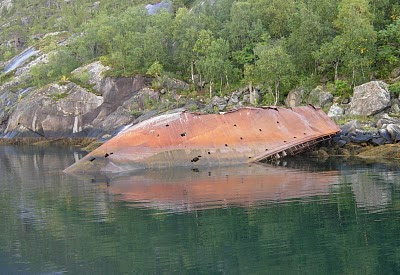 Georg Thiele on September 2, 2010. Slowly but steadily she is sliding down into the fjord.

The ship was named in honour of a German naval officer killed in World War I. It was on April 13, 1940 that Georg Thiele ran itself ashore after several hits by British warships. 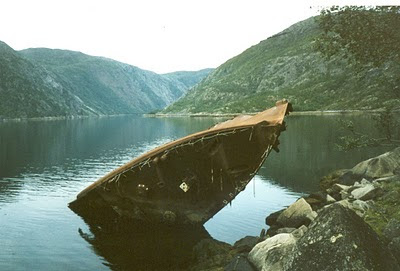 From the director of the Narvik War Museum (an absolute must for all visitors) we got the estimate that Georg Thiele will probably be completely down below the waterline in 5-10 years. It could happen quite suddenly as the ship is more disintegrated below water.

The third and final day of the quick tour of the area we visited the Troms Defence Museum of Setermoen, which has an indoor section and a large collection of military vehicles located outdoors and in several sheds. 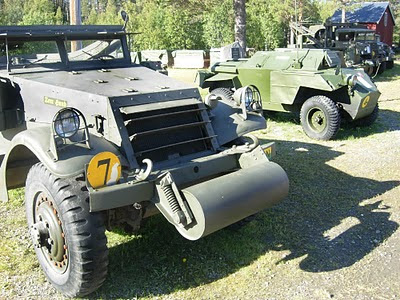 Those who so desired could take a ride in an unusual WWII armoured vehicle, a Canadian C15. 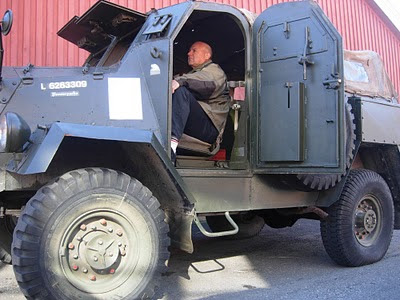 Inside the Defence Museum we got to listen to a lecture by none other than WWII warbird historian Kjetil Åkra. I have visited the museum annually since 2001 but never get tired of seeing it, not least because additions and changes are made. Here are just a few photos to give you an idea of the museum. 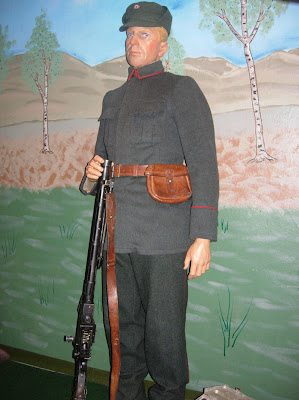 A Norwegian soldier in 1940 armed with a Danish Madsen machine gun, used extensively by both sides around Narvik. Also during WWI this weapon was used by many nations including Russia and Germany. 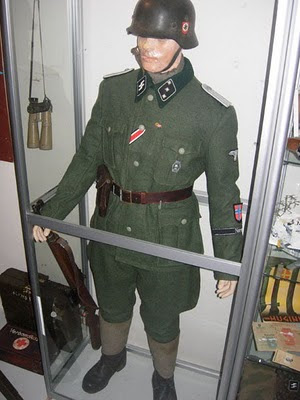 A Norwegian soldier of the Waffen-SS regiment "Norge" itself part of the "Nordland" division, as is apparent from the Norwegian arm shield and "Norge" cuff title. 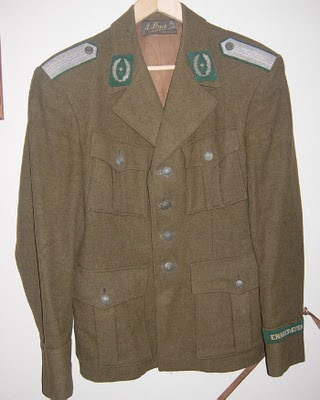 Finnish, Norwegian and German WWII history in one single garment. This tunic was worn by a Norwegian Quisling paramilitary work unit in northern Finland (Finnish Lapland) that supported the German troops there. 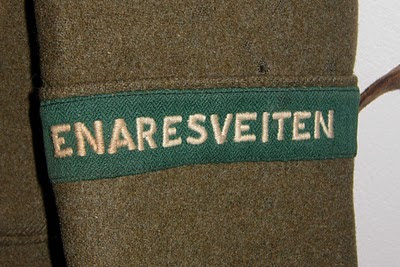 Enare is Norwegian (and Swedish) for the Finnish town of Inari in Finnish Lapland. Sveit is Norwegian for a district unit. I have never seen this cuff title anywhere else, has it been documented?

The final afternoon of the tour we spent in Harstad, examining a 406 mm "Adolf Gun", one of the largest naval guns placed ashore in Europe. The condition of this gun is remarkable in many ways. Theoretically it can still fire and in fact it did long after WWII, in the service of Norway. 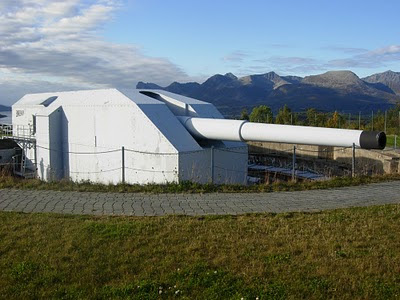 Even more impressive in real life, I can tell you. 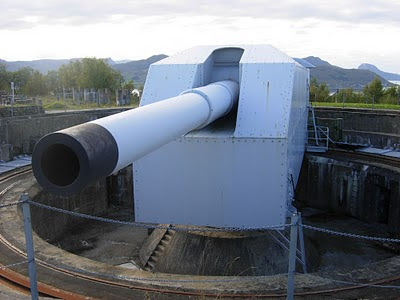 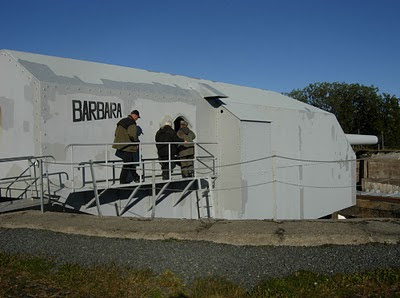 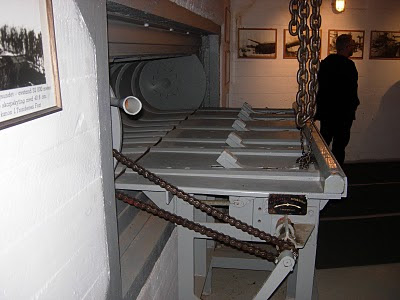 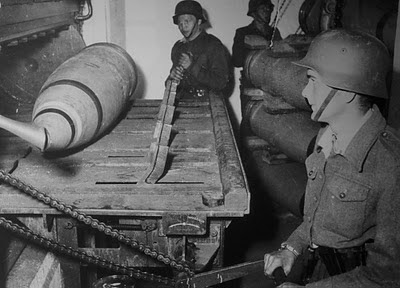 Same place as above but some 50-60 years ago. These are Norwegian soldiers well after WWII. There was still a lack of helmets, so German helmets were used. 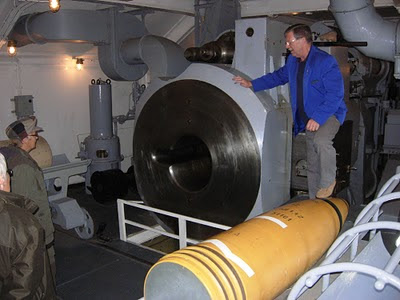 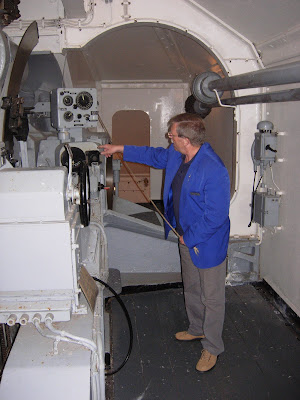 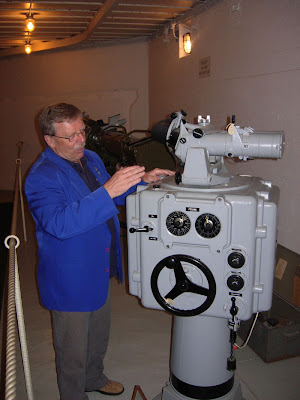 Many of the German fire control instruments are mechanical computers.

Thus ended this year´s WWII history tour for the Swedish Tourist Association. As a guide I had a great time, mainly thanks to very amiable tour participants. Hope to meet you again someday!
created by Lars Gyllenhaal at 12:12