Sweden, the Swastika and Stalin (2010) is the first modern book in English to cover just about all major aspects of Sweden during WWII. It should become required reading for all students of 20th century Scandinavian history. 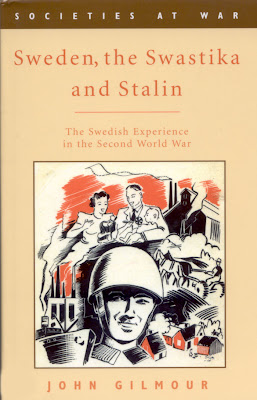 Good title - it captures the main concerns of the wartime Swedish government, Hitler AND Stalin. Never just one of them. The subtitle is also natural: The Swedish Experience in the Second World War.

The contents are also pleasing as the author has correctly recognized the major influence of events in Finland upon Swedish wartime policy and decision-making.

The following quote from the book, made by the British ambassador to Sweden, Sir Victor Mallet, sums up a sober view of Sweden during WWII: "Swedish neutrality was of far greater value to us than a Swedish act of suicide in 1940 would have been."

John Gilmour seems to agree with Sir Mallet and himself states "Swedish options were in practice heavily circumscribed".

With satisfaction I noted that the author has made some use of having read my book about WWII and northernmost Sweden, Slaget om Nordkalotten (with James F. Gebhardt).

However, Gilmour writes very little about the major Swedish volunteer movements of the war, the two for Finland in 1939 and 1941, and writes nothing about the Swedish citizens in Allied and German war service, nor about conclusions that can be drawn from Swedes at War. Well, I guess I should be grateful, as this means that students of 20th century Scandinavian history must also get the latter book...

What Sweden, the Swastika and Stalin is also lacking is a good cover and more photographs, better reproduced. Still, it is certainly an important and useful book. A second edition with a better cover ought to sell more than OK.
created by Lars Gyllenhaal at 22:24