I recently wrote about how German WWII submachine guns and pistols were still used in the 1960s by Norwegian soldiers in UN service in Africa and the Middle East. No small wonder then that they were in use within Norway even longer.

To illustrate the use of MP 40 submachine guns within postwar Norway there is this recent book cover: 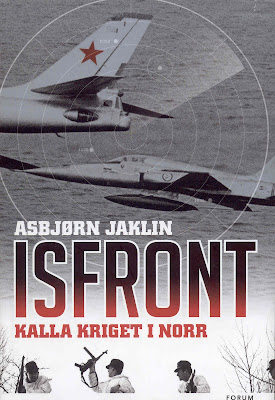 Yes, the submachine gun raised into the air is a German WWII weapon.

The book title Isfront translates as "Ice Front". It is a Norwegian book that recently came out in Swedish. The book is about the Cold War in the Arctic, mainly on the border between the Soviet Union and Norway. You might think not much happened up there on the desolate tundra. Well, that is not the case, as author Asbjørn Jaklin amply shows.

In 1968, for example, the Norwegian border guards (some presumably with MP 40s) got ready to fire on a large Soviet mechanized unit that was obviously about to cross into Norway. A few Soviet vehicles even did cross, but just a few meters.

Several of the Norwegian soldiers had their weapon safety levers in the "off" mode.

The Norwegians might very well have fired upon the Soviets, but wisely they abstained from doing so.

It turned out that the Soviet move was "just" a massive protest against a NATO exercise. The Norwegians did not immediately realize this, as the NATO exercise in question was not held by the border and not even close to it. The reasons for this Soviet demonstration of military might are very interesting indeed and have a lot to do with the Soviet experience of WWII, to be exact Operation Barbarossa.

Amazingly, the Norwegian authorities were able to stop the story of this very serious Cold War incident from reaching the Oslo media. Things were so much easier to control without mobile phones and the internet! This event only became fully known in 2008 through a Norwegian TV documentary. But Isfront also contains many other dramatic passages.

Isfront is not yet available in English, but it ought to be. The author´s previous book, The Northern Front (2006) about WWIIs northernmost battles (in my opinion not as good as this one), has been translated into several languages.
created by Lars Gyllenhaal at 14:34