As a Nordic author with a special interest in the German paras at Narvik I am a bit ashamed I did not write this book myself, or some Nordic colleague. Instead, a Spaniard, Óscar González, beat us to it. But, well done Mr. González! 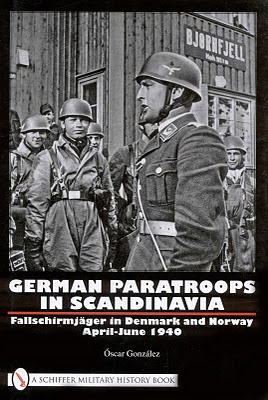 Soviet WWII parachute operations against Finland were minute and Finnish parachute ops vs. the Red Army were also very few and small-scale. The British Special Operations Executive (SOE) did drop a number of agents and soldiers over Norway and Denmark, but, again, very few at a time.

To study larger airborne actions in the Nordic area one must turn to the German invasion of Denmark and Norway in the spring of 1940, which is what Óscar González has done. His book German Paratroops in Scandinavia starts with a prologue written by one of the most experienced German paratroopers ever, Knight´s Cross holder Alexander Uhlig, who died two years ago. BTW a friend was able to interview Uhlig on video shortly before Uhlig´s death. I sure am looking forward to see that documentary.

Alexander Uhlig was personally part of the Narvik action and this is one of the great things about German Paratroops in Scandinavia, the author has located a number of veterans and visited the sites of action. Thus there are a number of experiences, facts and photos in the book that you will find in no other book.

Although I have been interested in the subject of German paratroops at Narvik for years the author has documented a number of things about the paras at Narvik, even some significant points, that are absolute news for me.

The book is very well illustrated and the quality of most of the photographs (some in colour), paper and binding are top notch. My only complaint is that some of the most unique photographs should have been reproduced in larger size. The photo on the cover is of course well-known to all interested in the subject. Perhaps a more unusual photo could have been chosen? But then it is a striking image.

If you wish to see the relevant areas and have a special interest in German paratroops - well, then this book is simply mandatory. I should think many WWII historians, elite unit buffs and collectors will also want to own this book.

German Paratroops in Scandinavia has been produced by Schiffer Military History in the United States. In Europe the book is distributed by Bushwood Books, who have a number of other titles about German paratroops and other elite units.

Finally I shall quote from the prologue written by Alexander Uhlig, because I truly believe that this was his heartfelt wish: "My only hope is that future generations will be spared the experience of war".
created by Lars Gyllenhaal at 14:47