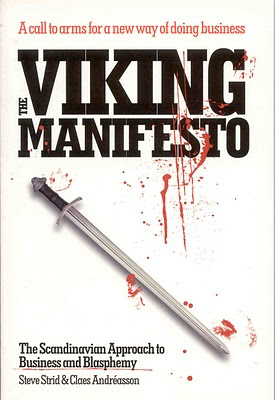 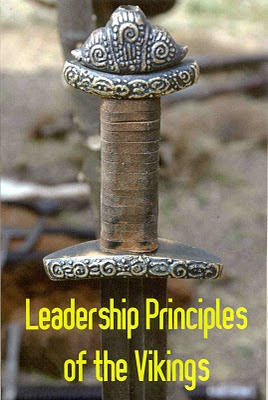 I will here review and compare two books that do not have that much directly to do with my main area of research, Swedes at war in the 20th century. But as Vikings were a reoccuring theme among Swedes in both world wars, even in the Spanish Civil War and with the WWII Allies, I think Vikings are OK for me to blog about ;-)

The Viking Manifesto and Leadership Principles of the Vikings both were published in 2007, so I hardly think the authors read each others books until their own had been published.

Let me first make one thing clear: neither one of these books should be taken that seriously regarding historical accuracy. These are above all books about the legacy of the Vikings, and they are both entertaining, light-hearted books. However they at the same time manage to be inspiring and thought-provoking. These are both books that I will return to many times.

The Viking Manifesto by Steve Strid and Claes Andréasson focuses on how to do business in the modern world, inspired by the Vikings, e.g. through quotes from Hávamál.

Brands is perhaps what the authors discuss best. The authors have refreshing ideas about marketing, especially about how to adopt a target group. Let me examplify this with a quote from the book: "A Viking always begins by making himself the target group. He asks himself: What do I want personally? What sort of brands and products do I like?"

Another thing I appreciate with this book is its attitude towards money, summed up by "Money is a good servant, but a bad master".

Finally, do not miss the warning "All assault, rape, drug use, theft, property damage and killing of monks referred to in this book are meant for literary and metaphorical purposes only". I guess that was almost seriously meant considering the risk of getting sued by a US lawyer...

The Leadership Principles of the Vikings by Jan Kallberg is in some respects a very similar book, but as the title says it is focused on leadership, which can be applied far outside the world of business. However, business is a reoccuring theme, as are the military tactics of the Viking raiders.

Kallberg´s book is a bit more serious than The Viking Manifesto but is at times at least as hilarious. I love the way Kallberg has matched nationalistic Viking illustrations with new captions like "Hey, dude, we are here to talk to you about bullshitting! The fortune and gold of Atlantis were gone centuries ago, liar!"

This to illustrate that the Vikings, according to Kallberg, had zero tolerance for "corporate bullshit".

"The Dark Ages was a troublesome era in world history but it also resembles the changes we are facing in the early 21st century with turbulence in the economy and the social order, and with questions about our belief system."

"Vikings would redefine the corporate concept in a heartbeat by first dismissing all leaders who are only title holders and can not lead when there is uncertainty and hardship."

To sum up things, Leadership Principles of the Vikings is not always as well-written & edited as The Viking Manifesto, but I still think you should get both books.
created by Lars Gyllenhaal at 15:44