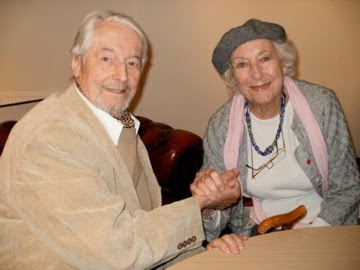 Walter schuck with Vera Lynn. Yes, this is a real image, not something photo-shopped. PHOTO: KI Michael Johansson

The above photo was taken by a friend also living in Arctic Sweden (in Luleå, not that far from me). His name is KI Michael Johansson and he is a documentary film maker. Johansson right now is involved in several very interesting projects involving German and Allied pilot veterans. In one of the next issues of the Finnish magazine Suomen Sotilas ("Soldier of Finland") Johansson will tell more about his meetings with Walter Schuck and his last adversary during WWII, former USAAF pilot Joe Peterburs.

If you have not seen the following TV news video with Walter Schuck and Joe Peterburs I think you will want to see it:

I have Schuck´s autobiography in German, Abschuss! and it is the finest book on a Luftwaffe pilot that I have. Here it is in English.

Some of my Norwegian friends met Schuck when he recently revisited Arctic Norway.
created by Lars Gyllenhaal at 14:22