While writing Swedes at War, we, the authors, were only aware of two Swedish citizens who fought as volunteers for the United States in the Vietnam War. Since then, thanks to our readers, we have found some more.

In our book we mention Björn Dahlin and Per-Olof Ödman who both joined the US Marine Corps to fight in Vietnam. Both saw heavy fighting but survived. I can recommend Björn Dahlin´s memoirs (they are in English) if you would like to know more about him.

If you are interested in a modern Swedish officer´s analysis of the war itself, then this is the book to get, here in its brand new paperback format: 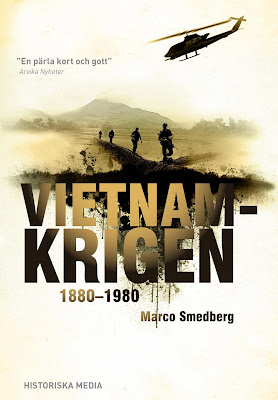 I agree with the quote on the cover from a Swedish newspaper review of the book: "a real gem". Marco Smedberg, who has written the book, is a lieutenant colonel in the Swedish Army and editor-in-chief of Militär Historia, the leading Swedish military history journal.

Vietnamkrigen ("The Vietnam Wars") has the important subtitle "1880-1980". This book is thus not only about the United States and Vietnam but so much more. Smedberg puts everything into context and as objectively as possible. The book is filled with more or less unknown facts and good quotes from all sides. Plus good photos and proper maps.

I think this book deserves to be translated. But if you can read Swedish you should get it now.

Going back to the subject of Swedes in US uniform in Vietnam we have since the publication of our book become aware of some more Swedish volunteers, including one on the opposing side. Some day we will write a sequel to Swedes at War, focusing on the Swedes in wars and conflicts after 1945. In that book (several years away) we will present these other Swedes and also write more about drafted Swedish American soldiers in Vietnam. It was only at the very end of writing our book that I became aware of that my own family had a member in the US Special Forces in Vietnam, who was killed in action there.

Vietnam War movies are also part of Marco Smedberg´s book. He lists eighteen movies, and not just American ones. Interestingly, Smedberg reports that "The Green Berets" (1968), the one with John Wayne portraying a character based on the the real-life Finnish volunteer Lauri Törni/Larry Thorne, was at first banned in Sweden. I had heard so but forgotten about it.

Thanks to Smedberg´s Vietnam movie list I also discovered "Rescue Dawn", a movie about a German volunteer in the USAF:

I have not yet seen it but would certainly like to. The Wikipedia-page about "Rescue Dawn" is very detailed, as is the page about the German volunteer pilot, Dieter Dengler. It would appear that family experiences in Germany during WWII motivated Dengler to join the USAF.
created by Lars Gyllenhaal at 10:51